Taming of the Shrew
January 2017 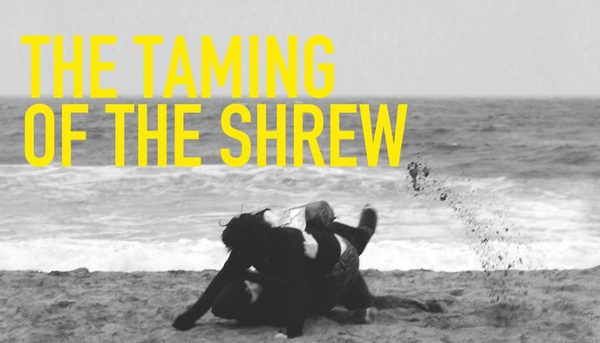 Voices Found Repertory continues its first season with a love story between two sociopaths. So, you know, a romantic comedy. Directed by Sam Robinson, this explosive tale has been a pop culture staple since its debut in the 1590s, inspiring the musical Kiss Me, Kate and the 1999 rom-com hit 10 Things I Hate About You. Its controversial depiction of a relationship between two terrible people is a play within a play, and preserving its original introduction creates a safe space to explore its themes of love, hate, materialism, gender roles, and finding “the one” in unexpected places.
When Christopher Sly passes out in a bar, a local nobleman plays a trick on him and convinces him that he is actually a lord recently awaked from a coma. A troupe of actors (in on the nobleman’s joke) performs a play for the confused Sly: The Taming of the Shrew. This play within a play is about Katharina, the headstrong and violent daughter of a wealthy lord in Padua, Italy. Her father has sworn that until she is married, he will not marry off his younger (and gentler) daughter Bianca to any of her many suitors. Katharina’s temper and wit have made her infamous across Padua, and it is thought no one will ever be brave enough to court her… Until Petruchio crashes the party. Loud, brazen, and utterly insane, Petruchio courts Katharina with confidence, and the two find a bizarre connection in their shared enjoyment of chaos. When he takes her back home to “tame” her, things get hairy — and they wouldn’t want it any other way.
“When you strip The Taming of the Shrew of its comic sub-plot… and focus on the bare bones of the story of wildcat Katherine and her ‘tamer’ Petruchio, Shakespeare's early play looks… barbarous, offensive and misogynistic. Yet Shrew is remarkably popular with audiences… either theatre-goers are secret sadists, who like nothing better than watching a spot of wife-bashing, or there's more to Shrew than meets the eye.” —Maddy Costa, the Guardian.
CALENDAR INFORMATION
PRODUCTION INFORMATION
Production Team
Cast
Subscribe to our blog to keep up with the production!